It may look like a villain’s lair straight out of a James Bond film.

But this is the Soviet-era facility in Siberia where Vladimir Putin‘s arsenal of bioweapons may be being housed today.

The State Centre for Research on Virology and Biotechnology in Novosibirsk Oblast is in possession of devastating diseases like smallpox and anthrax, as well as more recent killer pathogens like Ebola.

Opened during the height of the Cold War in 1974 as a bioterrorism research centre, it is still one of Russia‘s most heavily guarded sites, fenced off with barbed-wire with armed soldiers permanently stationed at its gates.

The 70,000sqft centre is about the same size as a football pitch and is one of 100 research and administrative buildings in the facility, known in Russia as ‘Vector’.

It is one of just 59 maximum-security biolabs in the world, a status it shares with the Wuhan Institute of Virology — the site at the centre of the origins of the Covid pandemic.

The secretive level four facility is nestled in the foothills of southwestern Siberia on the border of Kazakhstan, one of the harshest and most isolated places on earth, where temperatures can plunge to as low as -35C in winter.

Russia claims the lab, one of a dozen involved in the USSR’s manufacturing of bioweapons, shut down research into the weapons in 1992 after the fall of the Soviet Union.

But a US State Department report last year claimed Russia ‘maintains an offensive biological weapons program’ despite the country insisting it had ceased such research.

It comes after the US ambassador to the United Nations claimed that Putin could use bioweapons to overthrow the Ukrainian Government, warning ‘nothing is off the table’ for the Russian dictator. 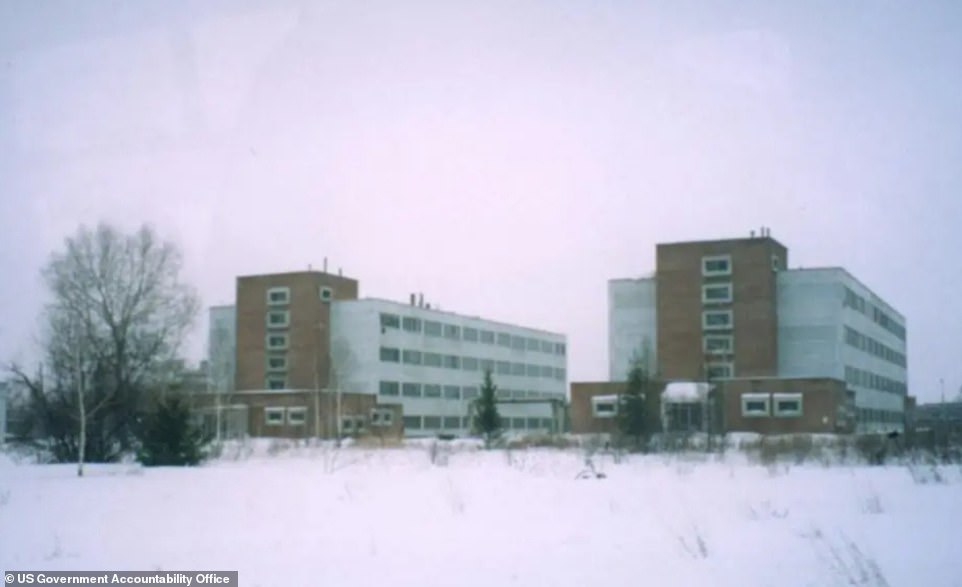 The State Research Centre of Virology and Biotechnology, known as Vector (pictured), released a statement saying a gas cylinder exploded on the fifth floor in 2019 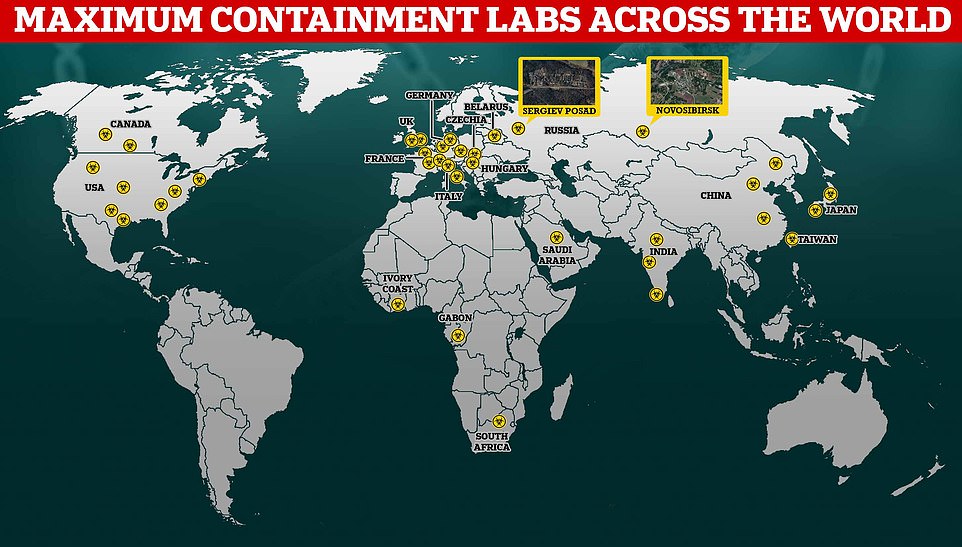 The lab is one of 59 level four maximum containment labs housing the most deadly viruses in the world, including the Wuhan Institute of Virology, where some believe the Covid pandemic may have originated 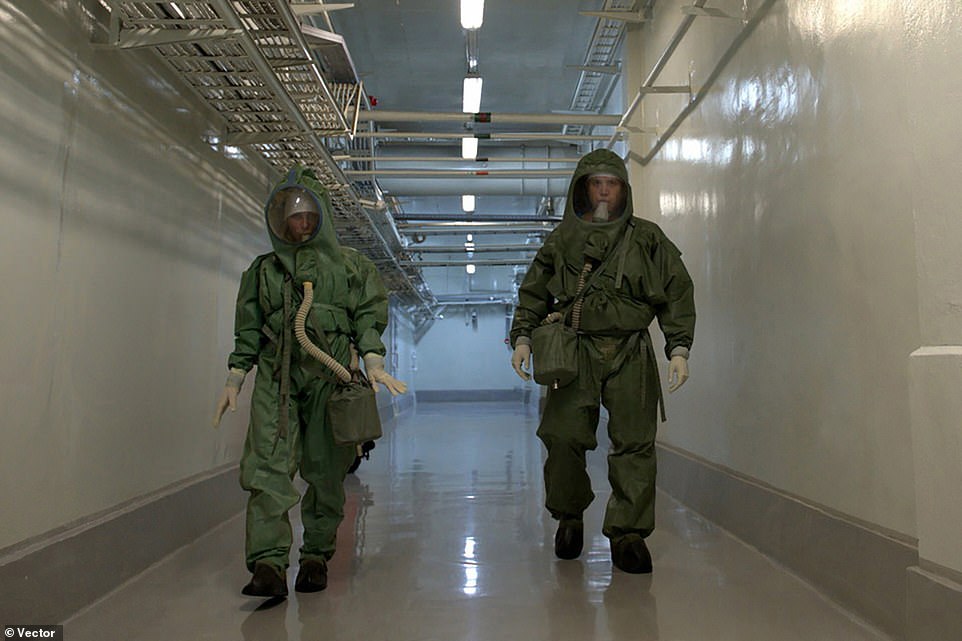 Officially, the lab focuses on developing vaccines for lethal viruses, including smallpox, anthrax, Ebola, HIV and Marburg virus. Pictured: Workers in hazmat suits at the lab 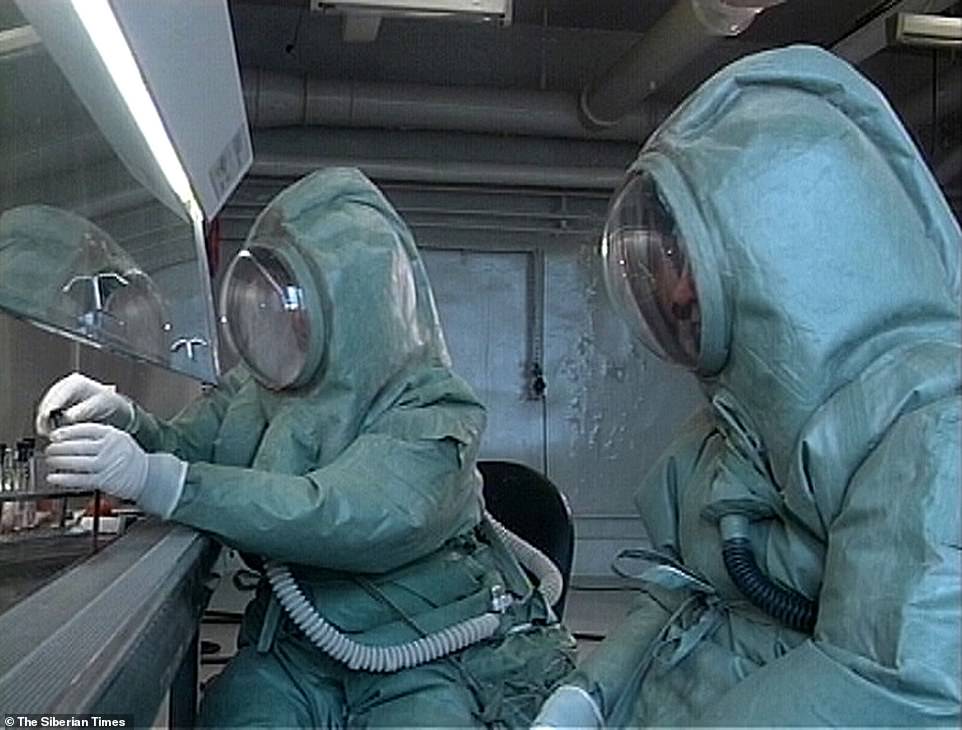 At least two people who worked at the lab have been killed from Marburg and Ebola respectively after accidentally coming into contact with the viruses. Pictured: Workers in hazmat suits at the lab 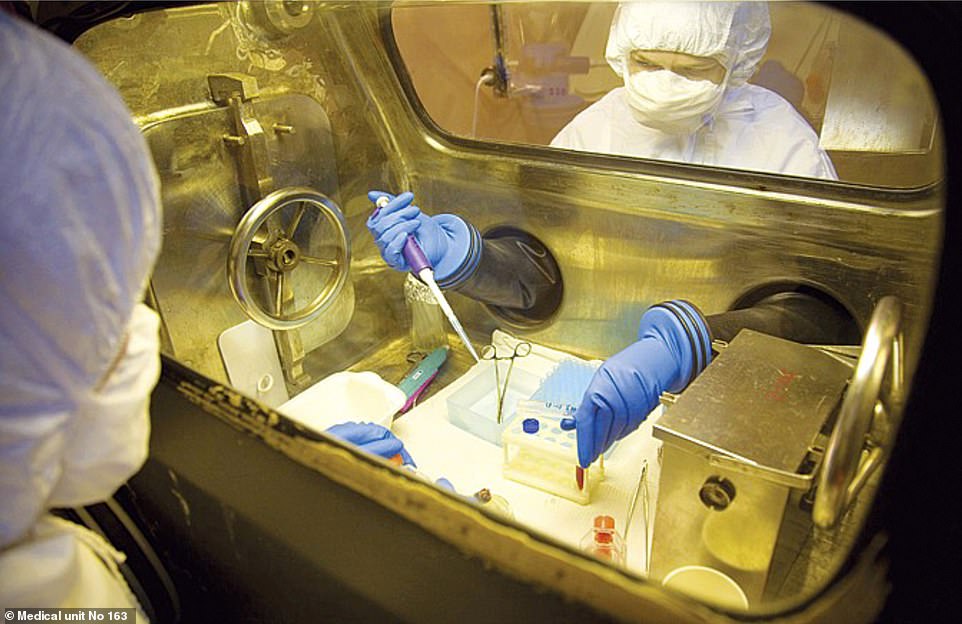 Vector (pictured in 2016, with medical workers handling the Ebola virus in medical unit number 163) is one of just two to house the deadly smallpox virus, with the other being the Centers for Disease Control and Protection in Atlanta

A top Russian microbiologist formerly in charge of the country’s repository of the planet’s most deadly diseases and viruses – including smallpox, Ebola and Marburg – has been missing for five years after vanishing without trace.

Professor Ilya Drozdov, 68, a scientist with knowledge of Moscow’s bio-warfare secrets, has been put on Interpol’s wanted list, suggesting the authorities fear he has gone abroad, according to reports.

For five years he was head of world famous Russian State Research Centre of Virology and Biotechnology, Vector, in Koltsovo, Siberia, a secret institute under heavy guard.

This centre produced smallpox on an industrial scale, while also weaponising Marburg, as part of the Soviet biological weapons programme, it has been reported.

In recent years Vector has been involved in efforts to find cures and antidotes to killers such as bubonic plague, anthrax, hepatitis B, HIV and cancer.

There has been no comment from Russian police over where they think Drozdov is now, or, for example, if they fear he has fled to the West or a country that might wish to exploit his expertise.

But the Interior Ministry confirmed he is on their wanted list and faces immediate detention if he can be found.

Russia itself has accused the US of developing bioweapons in Ukrainian labs as part of its justification for the war, although these claims have been denied by global experts.

Former US officials and non-proliferation experts also insist the labs are working to detect and prevent the spread of bioweapons, and have also helped in containing disease outbreaks.

The lab hit the headlines in 2019 when a gas explosion left one worker with second and third degree burns.

Bosses were forced to deny that the fire had exposed the public to pathogens stored inside.

Fifteen years earlier, lab worker Antonina Presnyakova died after she accidentally pricked herself with a needle which contained the Ebola virus.

And its former boss Professor Ilya Drozdov went missing in 2017 after being accused of stealing two million roubles — then worth around £27,000 — from the facility.

Professor Drozdov was put on Interpol’s wanted list but has still not been found five years later, with authorities fearing he escaped abroad.

The facility — also called the Vector Institute — is believed to be one of the locations where Russia may have continued the bioweaponary scheme, which was named Biopreparat in the Cold War era.

A US state department report last year stated that Russia ‘maintains an offensive biological weapons program and is in violation of its obligation under Articles I and II of the Biological Weapons Convention’.

The document said: ‘The issue of compliance by Russia with the BWC has been of concern for many years.’

The convention, which forced the USSR to officially disband Biopreparat, is an international treaty banning countries from developing and stockpiling biological weapons.

Biopreparat agency — which spearheaded the country’s biological warfare programme — was founded in 1974, the same year as the lab. It employed up to 40,000 workers across five military-focused institutes.

The Vector facility, which now employs around a third of the number 4,500 staff it had back in the Soviet era, is one of 59 level four security labs dotted around 23 different countries.

The largest facility in the world is the Wuhan Institute of Virology in China, where some believe the coronavirus pandemic began.

There are seven in the UK, the best known of which is the Defence Science and Technology Laboratory, run by the Ministry of Defence at its base in Porton Down, Wiltshire — where two labs research the threat from biological weapons.

Another high-security lab, run by the National Institute of Medical Research, is based in Camden, North London, and studies flu viruses capable of causing pandemics.

Experts are becoming increasingly concerned about the control and management of the dangerous organisms in these labs, with some warning that the safety measures are nowhere near sufficient to prevent a global pandemic caused by escaped viruses. 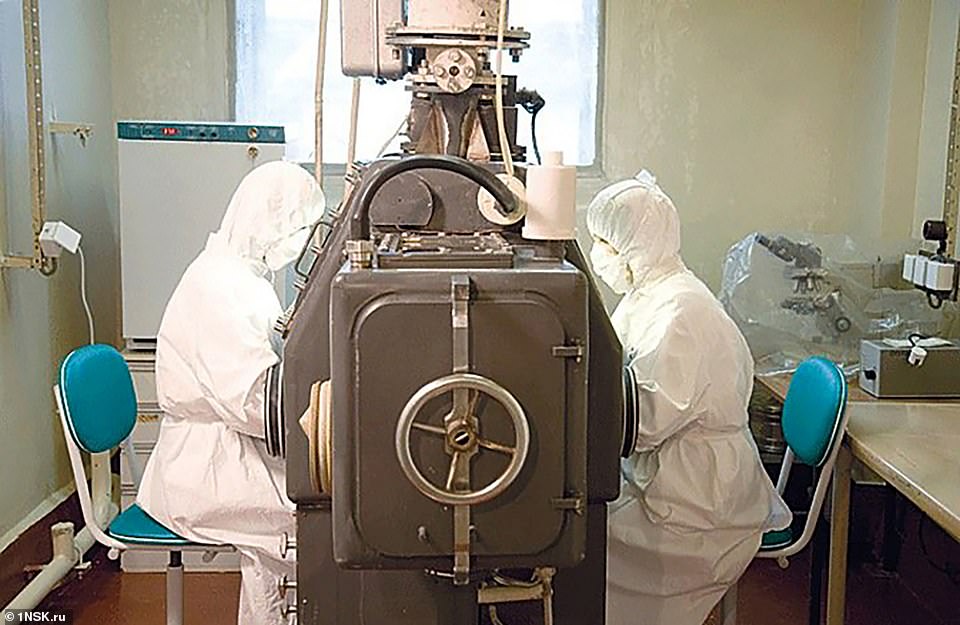 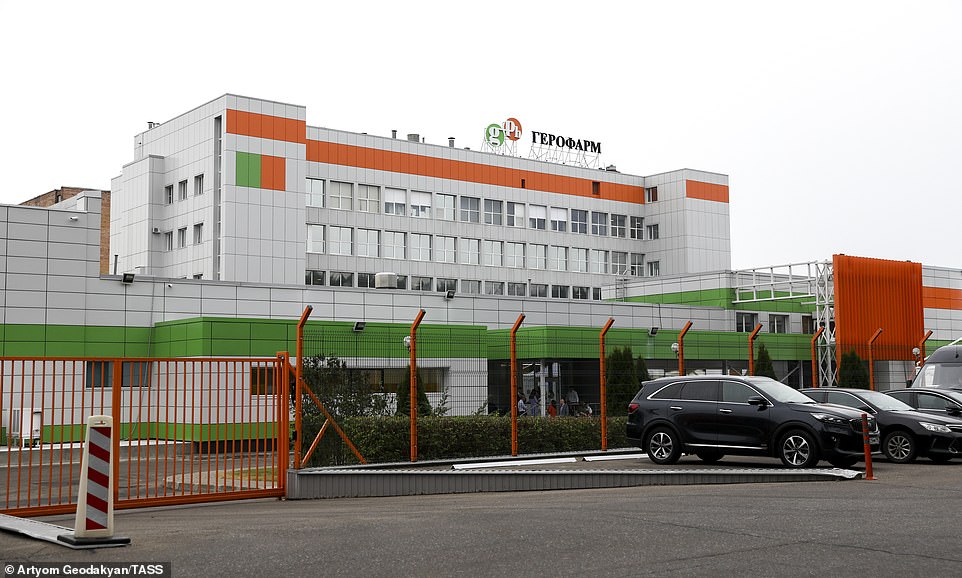 The State Centre for Research on Virology and Biotechnology in Novosibirsk Oblast (pictured) houses Russia’s bioweapon arsenal of smallpox, anthrax and Ebola 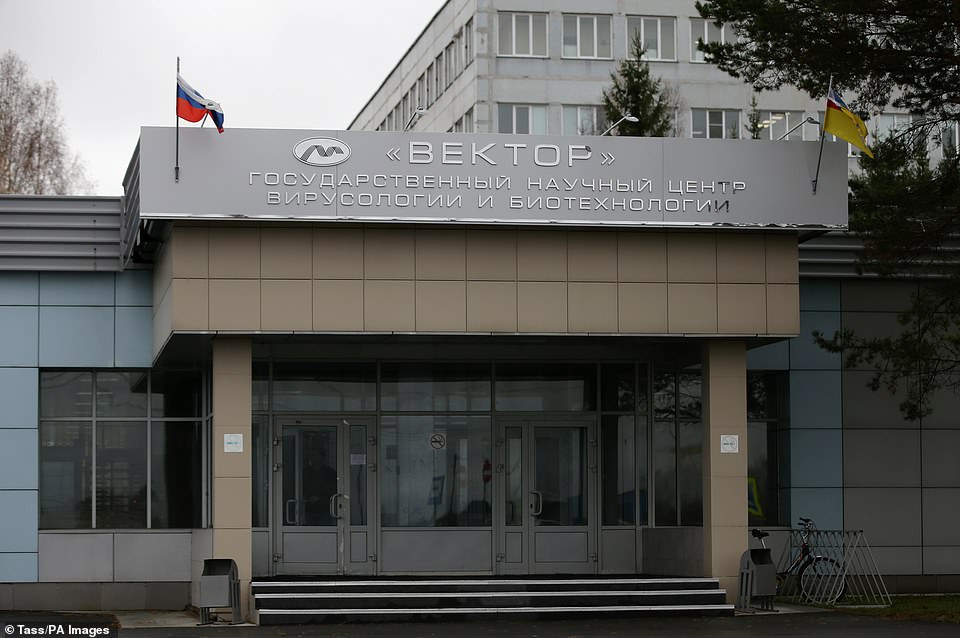 Vector is also one of just two labs to house the deadly smallpox virus, with the other being the Centers for Disease Control and Protection (CDC) in Atlanta, US

Russia has today stepped up its attacks on Ukraine’s major cities as officials in Mariupol said a ‘full-scale genocide’ was underway as Putin’s men unleashed a 15-hour artillery barrage while Kharkiv also came under heavy bombardment in a dark sign of what could be to come in the capital Kyiv.

Mariupol, located in the south of Ukraine on the Black Sea, has been surrounded by Russian forces and struck by artillery in an apparent attempt to bomb the city into submission as Putin’s men resort to ‘medieval’ tactics. Sergiy Orlov, the deputy mayor, said entire districts had been levelled with such heavy barrages that medics cannot get in to retrieve the dead.

‘We are near to a humanitarian catastrophe,’ he said. ‘Russian forces are several kilometers away on all sides,’ he added. ‘The Ukrainian army is brave and they will continue to defend the city, but Russia does not fight with their army, they just destroy districts… We are in a terrible situation.’

Meanwhile Kharkiv, Ukraine’s second city, came under heavy barrage in the early hours as Russian troops try to surround and seize it after days of fighting – with a rocket slamming into a university building and police station in the early hours before the city council was also struck, with one of the explosions caught in a dramatic video.

The bombardment gives a dark taste of what is likely to come for other cities such as Kyiv after analysts warned Russia’s military – having suffered heavy losses trying to pull off ambitious precision strikes – was likely to resort to surrounding cities and bombing them into submission to force a bloody victory.

Filippa Lentzos, a senior lecturer in science and international security at King’s College London, said 75 per cent of high-security labs around the world are sited in urban areas — increasing the likelihood of rapid transmission in the event of a virus escaping.

Vector is also one of just two labs to house the deadly smallpox virus, with the other being the Centers for Disease Control and Protection (CDC) in Atlanta, US. They are the only facilities in the world allowed to keep the virus under an international agreement.

They are both inspected for safety by the World Health Organization (WHO) every two years, with the Vector Institute’s last check-up coming in 2019 before the start of the pandemic.

The last naturally occurring case of smallpox was in 1977 and by 1980 the World Health Organization had declared it globally eradicated.

Smallpox is estimated to have killed up to 300million people in the 20th century.

Scientists at the lab had also previously weaponised Marburg virus — which kills 88 per cent of people that it infects.

A researcher who injected himself with the virus and died in 1988 is reportedly buried in a zinc-lined grave at a cemetery in the lab complex.

His death came 16 years before Ms Presnyakova accidentally pricked herself with Ebola and died while working in the lab.

In 2017, Professor Drozdov disappeared without a trace after a complicated legal wrangle.

He was head of the facility for five years and knew some of Moscow’s biggest biological secrets.

A court ordered Drozdov to be arrested ‘in absentia’ over alleged fraud, in a mysterious case linked to Vector which was only launched four years after he left the research centre, reported The Siberian Times.

After leaving the institute in 2010, he returned to the southern Russian city of Saratov, where he had earlier headed another major complex called Russian Scientific Research Anti-Plague Institute ‘Microbe’, providing protection against dangerous deceases like bubonic plague, anthrax, and cholera.

Colleagues at Vector claimed that as director he paid ‘exorbitant’ salaries to executives, while laboratory workers received ‘humiliatingly low wages’.

And in 2019 the lab made the news again when a gas cylinder explosion threatened to leak some of its deadly viruses.

Russia claims there is no sustained threat after a gas cylinder exploded on the fifth floor.

The mayor of Koltsovo claimed that no biologically hazardous materials were released in the explosion.

Since the Soviet Union collapsed, the United States has invested an estimated £7.5million at Vector to encourage the site to abandon bioweapon research in favour of vaccine development.

The lab claims it now only works on vaccine research and is no longer involved in biological warfare.

In recent years Vector has been involved in efforts to find cures and antidotes to killers such as bubonic plague, anthrax, hepatitis B, HIV and cancer.

We may finally know why the delta variant of coronavirus is so infectious – Livescience.com