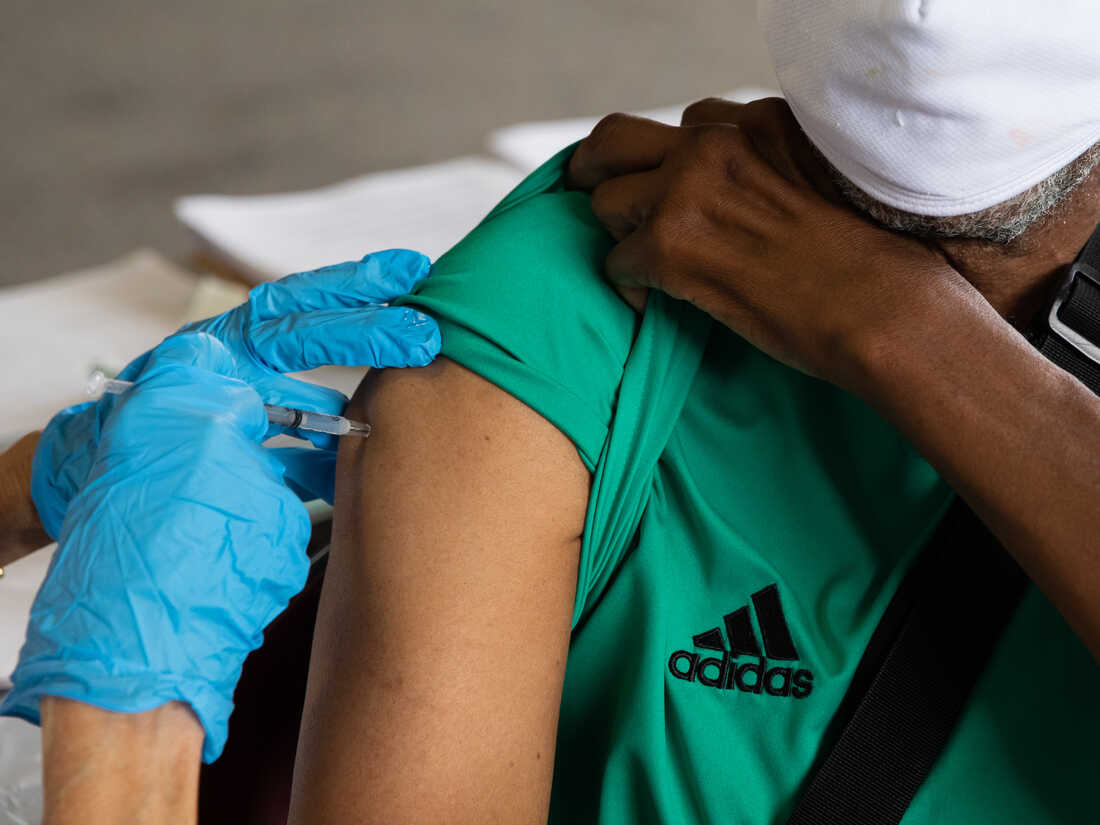 Rufus Peoples receives a dose of the Pfizer-BioNTechCOVID-19 vaccine at an Oakland County Health Department vaccination clinic in Southfield, Mich., in August. 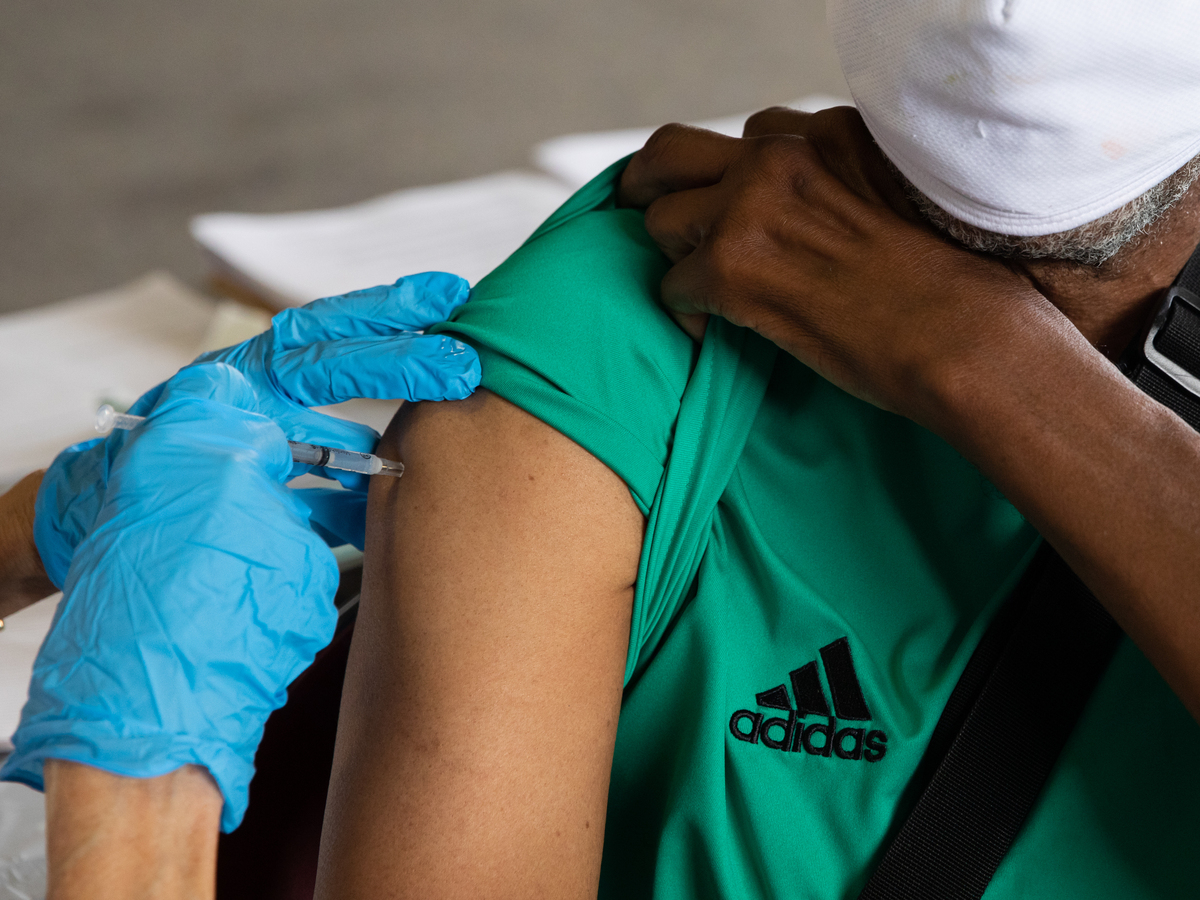 Rufus Peoples receives a dose of the Pfizer-BioNTechCOVID-19 vaccine at an Oakland County Health Department vaccination clinic in Southfield, Mich., in August.

The Food and Drug Administration authorized a booster dose Wednesday of the Pfizer-BioNTech COVID vaccine for people 65 and older and others at high risk of severe COVID disease.

The FDA says the vaccine can also be given to people ages 18 to 64 whose jobs or institutional exposure to the coronavirus puts them at high risk of serious complications of COVID-19.

A third shot of the vaccine can be given at least six months after completion of the two-dose regimen of the Pfizer-BioNTech vaccine, according to the authorization.

“After considering the totality of the available scientific evidence and the deliberations of our advisory committee of independent, external experts, the FDA amended the EUA for the Pfizer-BioNTech COVID-19 vaccine to allow for a booster dose in certain populations such as health care workers, teachers and day care staff, grocery workers and those in homeless shelters or prisons, among others,” said Acting FDA Commissioner Janet Woodcock in a statement. “This pandemic is dynamic and evolving, with new data about vaccine safety and effectiveness becoming available every day. As we learn more about the safety and effectiveness of COVID-19 vaccines, including the use of a booster dose, we will continue to evaluate the rapidly changing science and keep the public informed.”

The decision follows a contentious meeting of experts Friday who voted against broad FDA approval of a Pfizer-BioNTech booster for people 16 and older.

The panel found the evidence of waning protection from the Pfizer-BioNTech vaccine to be clearest for older people. One factor several panelists cited in their doubts about a broad approach to boosters right now was incomplete data on the risks of vaccination for younger people, especially myocarditis, an inflammation of the heart that is a rare side effect with the Pfizer vaccine.

The expert panel’s vote also supported FDA authorizing a booster dose for people at high risk of severe disease, a group that includes health care workers exposed to SARS-CoV-2 virus on the job and people with underlying health conditions.

“This first FDA authorization of a COVID-19 vaccine booster is a critical milestone in the ongoing fight against this disease,” Pfizer CEO Albert Bourla said in a statement. “We believe boosters have an important role to play in addressing the continued threat of this disease, alongside efforts to increase global access and uptake among the unvaccinated.”

A separate panel of advisers to the Centers for Disease Control and Prevention is meeting to discuss COVID boosters and to make specific recommendations about use of the Pfizer-BioNTech booster. A vote by that panel is expected Thursday afternoon. If the CDC signs off on the details of a booster, it could be rolled out to eligible people later this week.

Moderna said at the beginning of September that it has submitted initial data on its booster to the FDA. The company is developing a third dose that contains half the amount of mRNA, the genetic code that provokes an immune response, as the original shots. Clinical testing showed this booster given six months after the completion of initial immunization prompted a strong antibody response to the coronavirus, including the delta variant.

Johnson & Johnson, whose vaccine is given as one shot, said in August that it has evidence a booster shot prompts a strong immune response in people six months after their initial shot.

On Tuesday, J&J released more information on use of a booster dose: giving people a second shot two months after the first one boosted protection against moderate to severe disease from about 75% to as much as 100%.

In addition, J&J said waiting to give that second shot until six months after the first shot boosts antibody levels even more than at two months — by 12-fold versus four-to-six fold. The results suggest that waiting longer for that second shot provides stronger protection.

J&J said it has given the information to the FDA and plans to submit it to other regulators as well.

Despite the FDA advisory committee’s rejection of a broad booster rollout, some public health officials suggest that could change. Anthony Fauci, chief medical adviser to the president, told NPR’s Morning Edition Monday that he expected more data to become available in the next few weeks that would “actually modify and expand the recommendation” for the use of boosters to more people. “But for now we’ll go with what the FDA advisory committee has recommended.”

How the Navajo’s Cultural Values Are Driving COVID Vaccinations