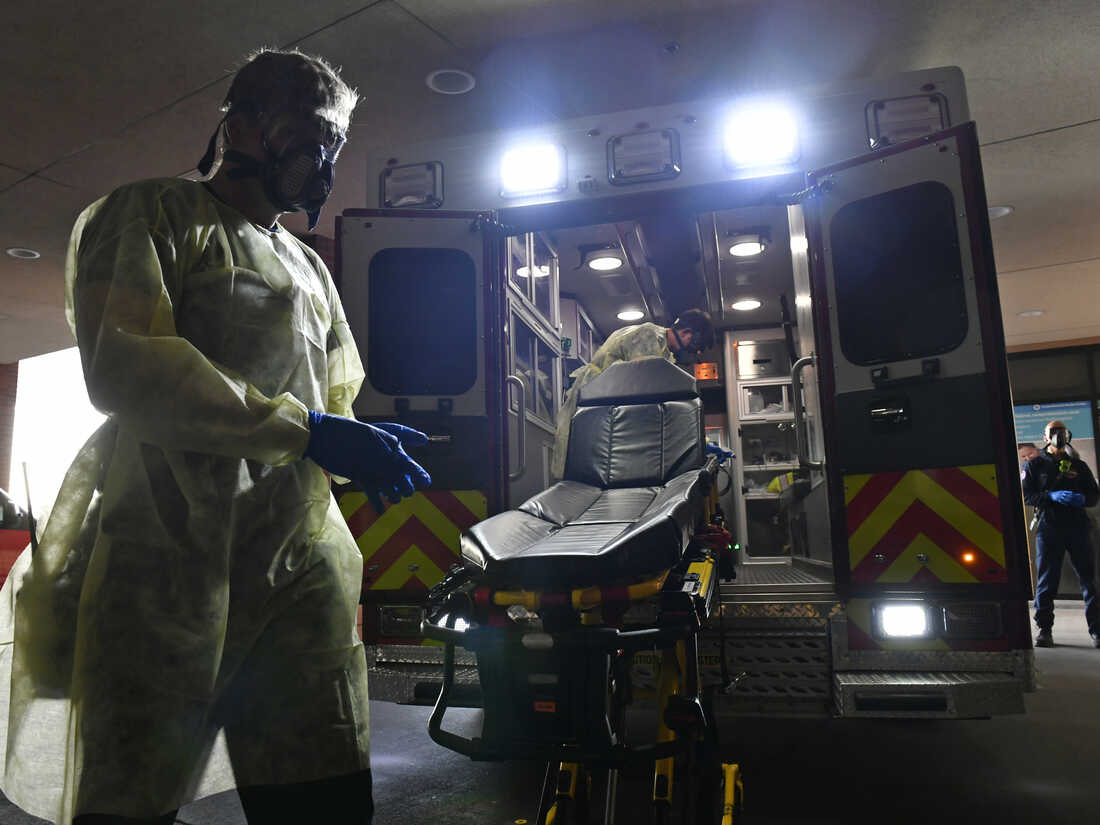 A long-running decline in COVID-19 cases nationally masks some trouble spots emerging in the upper half of the United States. The disease is hitting states in the Mountain West such as Colorado, Utah and Wyoming especially hard, but even parts of the Northeast have dealt with a worrying surge in cases and hospitalizations. 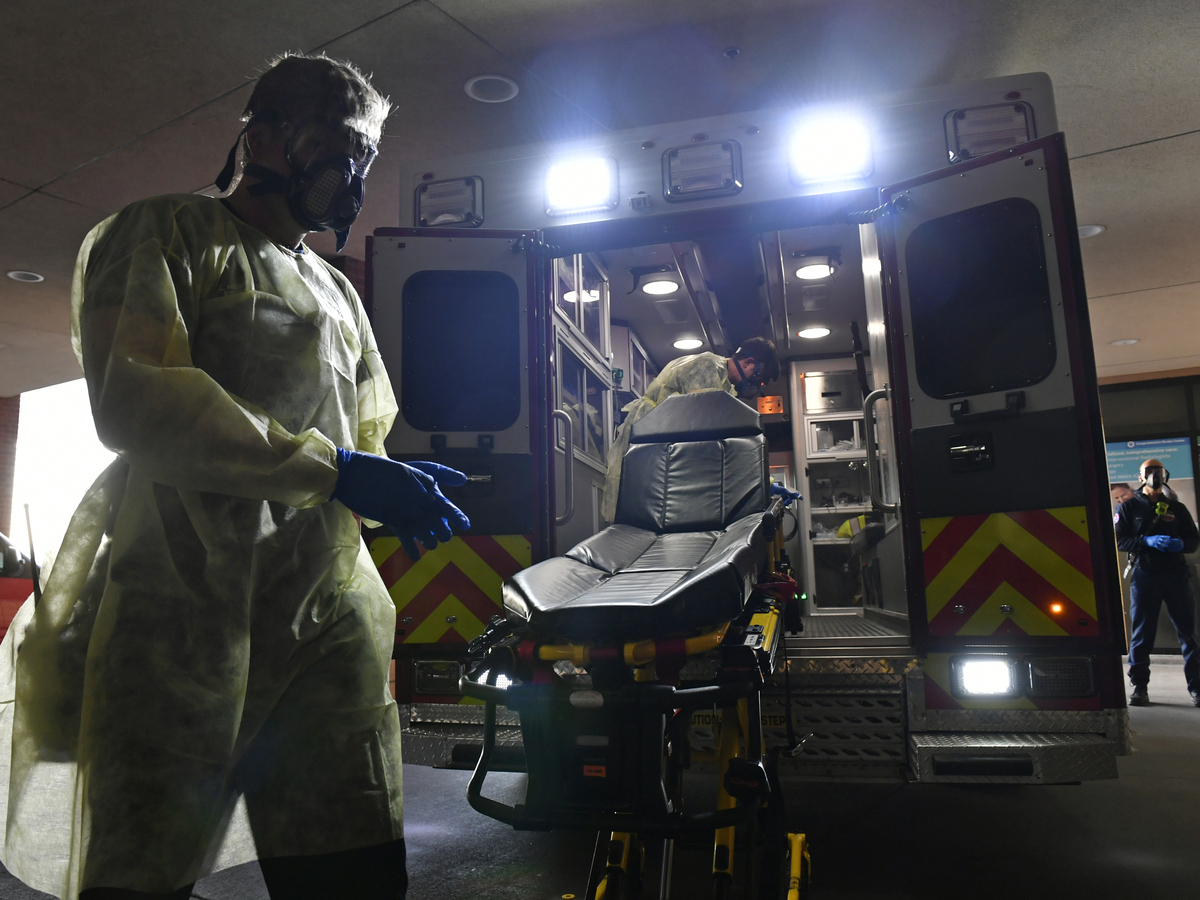 A long-running decline in COVID-19 cases nationally masks some trouble spots emerging in the upper half of the United States. The disease is hitting states in the Mountain West such as Colorado, Utah and Wyoming especially hard, but even parts of the Northeast have dealt with a worrying surge in cases and hospitalizations.

The U.S. has settled into an uneasy, drawn-out exit from the delta surge that took hold over the summer.

For many weeks, declining cases and hospitalizations have offered hope ahead of the holiday season, when Americans travel and spend more time indoors, but progress has stalled recently, with cases rising or plateauing in more than 20 states.

In fact, the country’s daily average of cases has hovered around 72,000 infections for the past two week as outbreaks smolder, particularly in the northern half of the country. About 40,000 people are in the hospital with COVID-19, under half of the peak in early September.

The Mountain West — where vaccination coverage tends to be lower — is the worst off, especially Colorado, Wyoming and Montana. Parts of the Southwest and Midwest are also trying to control an uptick. Even some of the heavily vaccinated Northeast has been dealing with increases during the fall.

Modeling suggests that cases will likely stay high through the holiday season but will not accelerate into a new nationwide surge as occurred last year, says Dr. David Rubin, who leads the COVID-19 modeling group at Children’s Hospital of Philadelphia.

“The next few weeks are really going to tell us about the holiday season,” he says. “I’ve got cautious optimism, particularly in highly vaccinated areas right now.”

Now that younger kids can start to get vaccinated, that could make a substantial difference in controlling cases as families gather together. That gives Rubin “the greatest hope that our worst days are behind us.”

Some experts are less sanguine about what direction the pandemic is heading, though.

“There is more than enough human wood for this coronavirus forest fire to burn,” says Michael Osterholm, director of the Center for Infectious Disease Research and Policy at the University of Minnesota. Researchers there estimate that about 70 million Americans remain vulnerable to the virus due to a combination of waning immunity and lack of vaccination.

“It’s not going to look like it was in January because we have a lot of immunity,” says Dr. Julie Parsonnet, a professor of epidemiology and population health at Stanford University. “But we’re going to see waves — the peak of the waves is going to get lower and lower, but we’re still going to see them as the population gets more and more immune.”

The pandemic grips the Rockies

As cases have plummeted in the South, many parts of the West have contended with their worst surges to date.

With only about 44% of its population fully vaccinated, Wyoming ranks below almost every other state. This reality, coupled with the arrival of the delta variant of the coronavirus, had Dunn’s hospital prepping months ago: “We knew it was going to hit, so it’s been very stressful.”

“We are definitely in a crisis in terms of people getting the care they need,” she says. “When a patient needs an ICU bed, it takes us two to three hours because they’re all full. Usually it takes 10 minutes.”

To her dismay, many members of the public seem unaware of the distress in their local hospitals. And Dunn’s hope that this would propel more people to get vaccinated — Utah’s vaccination rate is about 53% — have not materialized. “We’re just seeing a really low, slow uptake,” she says.

Meanwhile, Colorado’s governor, Jared Polis, has issued orders that allow hospitals to turn away some patients if necessary and that clarify when hospitals can activate the state’s crisis standards of care plan, due to the crush of patients filling up intensive care units.

“We have all these COVID-positive patients, but we also have a lot of other patients that during our last major surge we weren’t seeing,” says Dr. Michelle Barron, medical director of infection control and prevention at UCHealth, Colorado’s largest health system.

The backlog of other patients, often people who delayed care, and the staffing shortages have put their hospitals in a precarious position. Colorado has vaccinated more than 60% of its population against COVID-19, putting it ahead of many other neighboring states. But Barron says that this still leaves plenty of people who are potentially susceptible to infection or who can have complications because their immune system is compromised.

“The vast majority of the patients that we’re seeing really are those that are still unvaccinated,” she says.

Lessons learned from a Vermont surge

Even some states that had set the standard for successful vaccination campaigns have weathered a big wave of infections this fall.

Vermont is one sobering example.

The state has vaccinated more than 70% of its population against COVID-19, including the vast majority of its older adults. Still, it hit new records in daily coronavirus cases last month, although the per capita rate is not as high as many states at the peak of their surges.

“We had as many or more patients at this point than we’ve ever had over the course of the last two years,” says Dr. Rick Hildebrant, chief of hospital medicine at Rutland Regional Medical Center in Rutland, Vermont. “But we have never seen the type of scenarios in other parts of the country, where the hospital systems have just been overwhelmed by COVID.”

In fact, COVID-19 accounts for a small portion of the overall patient volume in Vermont’s hospitals, which are also struggling with very busy emergency rooms and the consequences of deferred care. However, the added stress of a coronavirus surge has pushed the hospital to “operate beyond capacity for weeks,” says Tim Lahey, an infectious disease physician at UVM Medical Center.

“It’s a clarion call to other states that are catching up to Vermont: Just because you have high adult vaccination percentages doesn’t mean that the game is over,” he says.

While cases are now trending down in the state, Lahey says the surge there has also revealed that a “vaccine only” strategy — one that dispenses with interventions like masks — can be risky when a relatively small portion of the population remains unvaccinated.

But Vermont’s experience does underscore that well-vaccinated states can stave off the kind of disaster seen in other states such as Idaho and Wyoming, where half, if not more, of the population remains unvaccinated, hospitals were overwhelmed and death rates were much higher.

“The data is unassailable at this point in terms of the protection of broad community vaccination against severe disease,” says Rubin, of Children’s Hospital of Philadelphia.

Some major cities in the Northeast have also seen increased transmission this fall, he says, but “they’re still holding up pretty well,” and that could mean they “prove somewhat resilient through the holiday season.”

Whos Eligible, How to Sign Up: Everything We Know About Phase 1C COVID Vaccines in Chicago – NBC Chicago