The highly infectious variant also hit the white-tailed deer population on Staten Island, the most suburban of the city’s five boroughs, according to a study led by Penn State University scientists.

DENVER DROPPING MASK OR PROOF OF VACCINE REQUIREMENT: OMICRON HAS ‘RUN OUT OF FUEL’

The omicron variant was detected in nasal swabs from seven of 68 Staten Island deer tested between Dec. 13 and Jan. 31, according to the study, which was funded by the USDA’s National Institute of Food and Agriculture.

It was already known that deer can catch COVID-19, after earlier variants were found in white-tailed deer in New York and several other states. But the Staten Island study is the first to find evidence of the omicron variant in deer or any wild animal population, Suresh Kuchipudi, a professor of virology at Penn State who led the research team, said Tuesday. 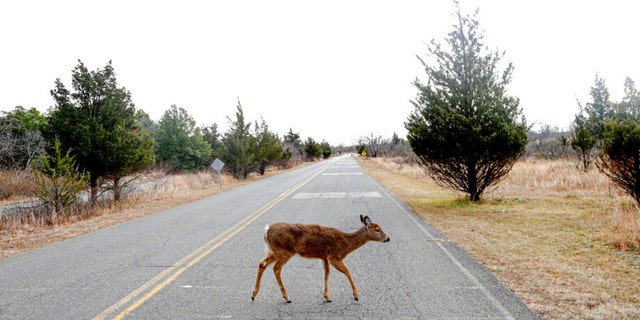 “This sort of opened up the possibility that, like the previous variants, omicron can and has spilled over into animals,” Kuchipudi said. “So therefore we need to continue to monitor.”

Although omicron has been found to cause generally milder COVID-19 symptoms in humans than previous versions of the virus, scientists worry that new variants could emerge that make people sicker.

Kuchipudi said the spillover of omicron from humans to deer sparks fears that new and possibly vaccine-resistant mutations could evolve undetected in non-human hosts.

“The major concern is that when we let the virus circulate in any animal host, in addition to humans, the complexity of virus evolution becomes very, very difficult to assess and comprehend,” he said. “So the bigger question is, the unmonitored or unchecked transmission of SARS-CoV-2 in deer and potentially other animals could result in the emergence of completely novel variants that might potentially undermine the protection provided by the current vaccines.”

Kuchipudi also noted that one of the infected deer in the study had COVID-19 antibodies from a previous infection, an indication that deer, like humans, can experience breakthrough cases.

The Staten Island deer study has not yet been submitted to a peer-reviewed journal but has been published as a pre-print because of the significance of the findings, Kuchipudi said.

While humans travel to Staten Island by ferry or bridge, deer first got there by swimming from New Jersey, according to New York City officials. The animals have long caused problems for the borough’s motorists and gardeners.

The city has contracted with wildlife management firm White Buffalo to control the deer population by performing vasectomies on the bucks. A spokesperson for the city Parks Department said the most recent estimate for Staten Island’s deer population is 1,616 animals — a 21% reduction since 2017.