A fourth COVID-19 vaccine dose significantly boosts protection against severe illness in older adults, according to an Israeli study released on Tuesday.

The study compared people over age 60 who received a fourth vaccine dose against those who only had three doses. In the group that received three doses the rate of severe disease was 3.5 times higher after four weeks.

The data was based on 1.2 million Israelis over the age of 60 who were eligible for the additional shot and were monitored between January 10 and March 2, during the Omicron wave.

Confirmed infections after receiving the fourth dose were lower, but that effect dropped after four weeks and was almost gone after eight weeks.

The protection against severe illness did not decrease in the six weeks after receiving the fourth dose.

The study did not provide any data on younger people.

Israel approved the fourth dose in January to all Israelis aged 60 and over, medical workers, and those who are immunosuppressed, becoming one of the first governments to do so. The eligible group could get the extra shot four months after receiving their third dose.

The new findings were published on Tuesday in the peer-reviewed New England Journal of Medicine.

The study was conducted by researchers from the Health Ministry, the Weizmann Institute of Science, the Technion, Hebrew University and Sheba Medical Center. The Health Ministry’s director of public health, Dr. Sharon Alroy-Preis and Health Ministry Director-General Nachman Ash were listed as co-authors. 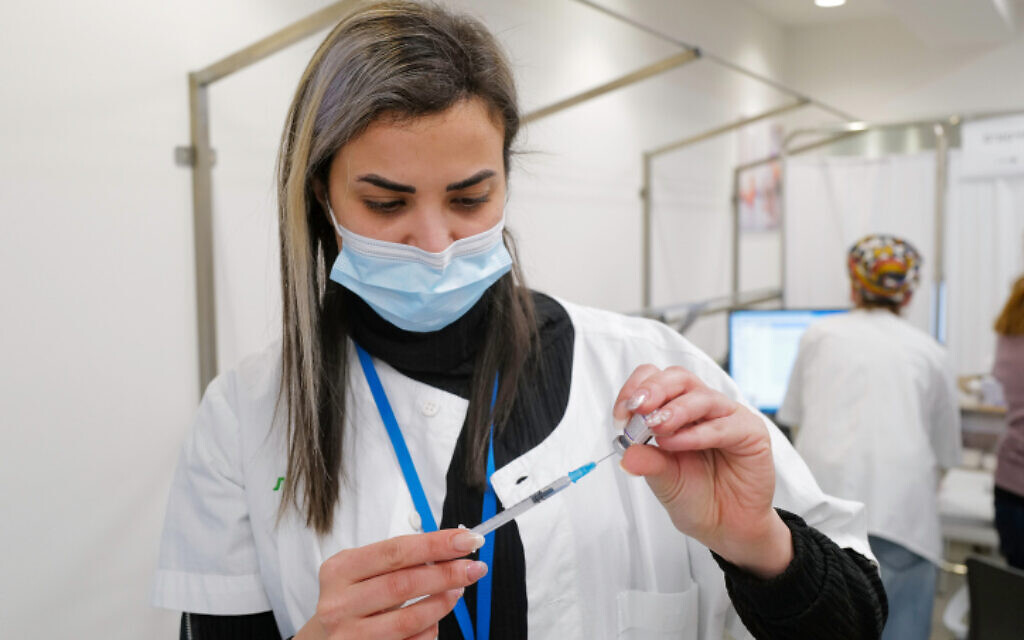 A health worker prepares to give a dose of the COVID-19 vaccine at a Clalit Health Services center in Katzrin, Golan Heights, January 9, 2022. (Michael Giladi/Flash90)

The new study contributes to similar findings from Israeli researchers on the efficacy of the extra shot, including Health Ministry data from January the yielded results similar to Tuesday’s research.

Sheba Medical Center launched the world’s first study on the efficacy of a fourth dose in December.

A previous Israeli study found that a fourth dose did not do much to defend young and healthy people against catching the virus, but did give “moderate” protection from developing symptomatic illness.

On Monday, Alroy-Preis said Israel was heading toward resuming normal life alongside COVID-19, as the rate of transmission again began to recede.

“You could say that we are near ‘normalization’ with the virus, so to speak,” Alroy-Preis said. “We are moving in that direction through various steps. Children in schools no longer need to quarantine; same with people returning from abroad.”

Do you value The Times of Israel?

If so, we have a request.

Every day, our journalists aim to keep you abreast of the most important developments that merit your attention. Millions of people rely on ToI for fast, fair and free coverage of Israel and the Jewish world.

We care about Israel – and we know you do too. So today, we have an ask: show your appreciation for our work by joining The Times of Israel Community, an exclusive group for readers like you who appreciate and financially support our work.

That’s why we started the Times of Israel ten years ago – to provide discerning readers like you with must-read coverage of Israel and the Jewish world.

Thank you,
David Horovitz, Founding Editor of The Times of Israel